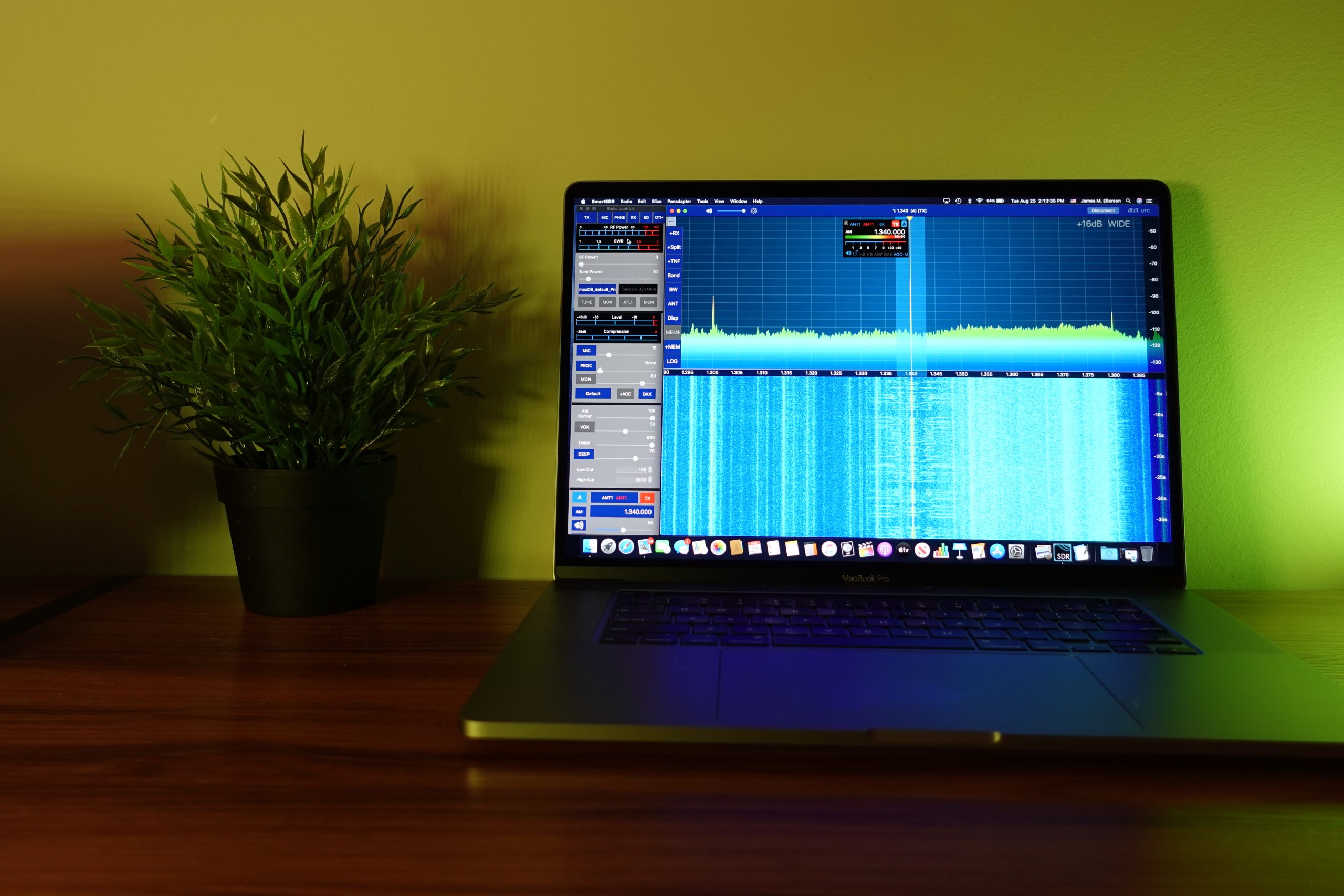 Introduction
Apparently Hell has actually frozen over. We now have a full desktop client for Smart SDR for Apple macOS systems. It is pretty well known that Flex Radio has the best remote capabilities of any radio available today. This is an area that manufactures like Icom, Yaesu, and Kenwood has not been able to match. Sure, there has been some feeble attempts to offer decent remote and control software for these radios, but they have typically fallen far short of Flex Radio offerings. However, owners of Macs have been left out of the fun for many many years. In the past Mac users were forced to use the workarounds such as virtual machine software like Parallels or Apple Bootcamp to run the Windows version of SmartSDR. This approach has worked pretty well in some cases, but in other cases it didn’t always achieve the best results depending on the machine configuration. Finally, we have a native SmartSDR client for Mac users which will allow SmartSDR to run more efficiently on Apple desktops and laptops. The macOS version of SmartSDR will also make it easier to integrate external devices such as USB microphones, headphones, external controllers, etc. into the macOS environment. However, the question that most of you will have is “Is it any good?”. The answer is yes, it is. Not only is it good, SmartSDR for macOS is darn good, much better than the Windows version of SmartSDR. The macOS version of SamrtSDR offers far more features and value than the Windows version. Another advantage of the macOS over the Windows client is that Flex Radio can be notoriously slow in providing bug fixes and adding new features to its software. The author of SmartSDR for macOS is Marcus, DL8MRE. You may be familiar with Marcus’s SmartSDR for iOS which allows for SmartSDR to be used on an iPhone or iPad. Marcus is very quick to fix reported bugs and typically respond quickly to end users’ questions. There have already been several updates released for the macOS version of SmartSDR correcting some bugs in the original release. If you are familiar with SmartSDR for IOS, the macOS version will look immediately familiar. The macOS version includes all the paid addons of the IOS version and more in the price of the macOS software making it an outstanding deal. The software supports Flex Radios using the either the 2.x firmware or the 3.x software. I have been using the macOS version for a week or so and here are my impressions of the software and it’s features.

User Interface
If you have used the Windows or IOS versions of SSDR, then the macOS version will look familiar. The user interface panels can be placed anywhere on the screen and sized to your needs. The typical interface includes a panel that allows the user to access various functions of the radio itself like, meters, TX/RX control, power settings, microphone settings, etc. You can have as many panadapters as your radio can support. Again, this pretty much is the standard interface common to all versions of SSDR. Most of the same settings that are found in the Windows version and IOS version are found in the macOS version. However, there are some settings that are more specific to the Mac Version of the software.

Install and Setup
Once downloaded the software installed very easily. There is really not much setup involved. You will need to either connect your Flex radio directly to your Mac using an ethernet cable, or directly to your network / Wi-Fi router, or to a Wi-Fi gateway device. Once connected and SmarSDR is started it will automatically find your Flex radio and the network. Simply select the Flex radio in the list and select connect and you should be good to go.

Built in FT8 and FT4
One of the best features of macOS SSDR is that FT8 and FT4 is built right into the software application itself. No more trying to setup often confusing interfaces and settings involved to get 3rd party FT8 software programs running. Just bring up the FT8 / FT4 application, set your frequency and go. The FT8 / FT4 module has some pretty nice features over some more dedicated 3rd party FT-8 / FT4 apps. For example, automatic QSOs. Just click on a station calling CQ and the FT8 / FT4 module will automatically contact the other station and complete the transaction to make a contact. The program will automatically attempt several retries and automatically stop after the retry limit has been reached. The same works for calling CQ. The program will automatically answer a receiving station and complete the QSO. Again, the program will time out after several attempts at calling CQ with no answer. There are other handy features built into the FT8 /FT4 module. There is a built-in drop-down list of frequencies to allow you to quickly tune your radio to FT4 / FT8 frequencies. Received stations call signs are displayed at the bottom of the panadapter screen which is very nice. There is also a handy map that will show the locations of active stations either on a globe or world map. Contacted stations can even be very quickly saved to an internal logbook for later export to other logging applications. The built in FT8 / FT4 feature makes working these digital modes fast, easy and fun.

Built-in Logging
The built-in logging feature of macOS SSDR is fairly simple and fast. FT8 / FT4 contacts can very quickly added to the logger. When a contact is completed in the FT8 / FT4 module is completed, a popup box will allow you to quickly add that contact to the log. Of, course the logging program can be used to log SSB and CW contacts. Actually, the logging feature is super useful for logging QSOs quickly while using the software. The logger also has a contest mode that makes working contests a little easier by providing additional information. If you prefer an external logging application, you can export or import the log data by using the export / import ADIF file feature. Also, the UDP Broadcast feature will allow you to connect to 3rd party loggers like Log4OM and N1MM loggers. 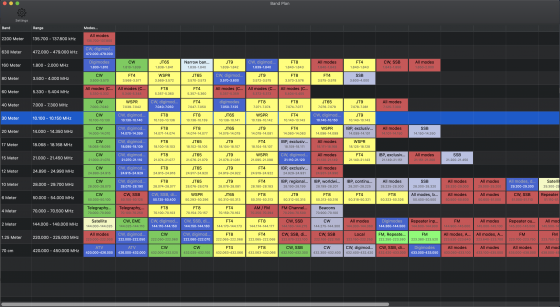 Band Plan Display
The band plan feature is a nice feature that shows a chart of what frequencies are used for what modes within a frequency range. By click on one of the segments, the radio is tuned to that frequency range 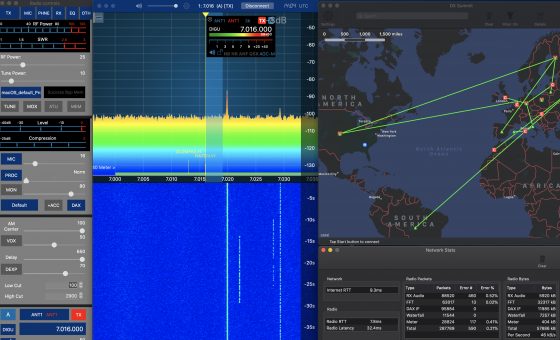 Built in DX Cluster Support
Unlike the Windows version of SmartSDR, there is no need to use an external software application to integrate DX spots. A DX cluster application is built right into the macOS version of SmartSDR. DX spots are displayed as list in a separate window as well as within the Spectrum / Waterfall window. This makes the spots much easier to locate the signal on the spectrum / waterfall display. You can also click on the spot in the DX Cluster window and have the radio tune directly to the spot frequency. 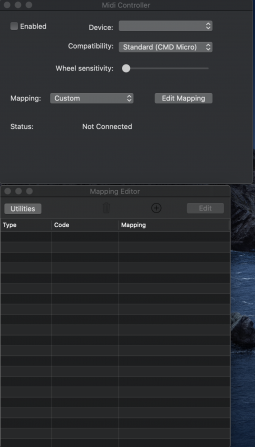 Midi Device Support
This a great feature if you want to use external hardware controllers for your Flex Radio. There is also built in support for the official FlexControl tuning wheel. One of the best features of the built in Midi Control is that you can map any hardware controller to control the functions and features of the Flex Radio. There are numerous types of hardware midi controllers available so you can get pretty creative with setting up hardware buttons, sliders, or jog wheels. The midi control can also be used to automate several functions at once depending on the controller. The Midi Control feature is only found in a very few SDR client programs.

Support for macOS Audio Devices
macOS Smart SDR allows you to access both internal as well as external audio devices plugged into your Mac. So, you can use the internal microphone built into the computer or eternal USB microphones or sound interfaces. The same holds true for external USB speakers or professional audio interfaces connected to high end speakers.

CW and CWX
Support for CW and CWX is integrated directly into Smart SDR for macOS. CW can be sent directly from SmartSDR application in Live mode using the keyboard or via macros.

Support
Software Support has been excellent from Marcus. He has been very quick to respond to questions and responding to bug fixes. The software will automatically update itself whenever update becomes available.

Conclusion
Undoubtedly, Smart SDR for macOS is the very best version of SmartSDR available right now. It has the advantage of several useful features that are just not available in the Windows version. These features are well thought out and very useful making the software easier to use and more efficient. The software runs very well on the two Macs that it was tested on (2019 Macbook Pro 16 Core i7 and a 2019 iMac 27 Core i5 with a Flex 6400M). Since native macOS software typically is very efficient, older Macs should be able to handle macOS SSDR fine. This should be advantage to owners of much older Macs that have had to run SSDR using virtual machine software in the past which can be very slow. Overall, a great job from Marcus DL8MRE.

3 thoughts on “Smart SDR for macOS”