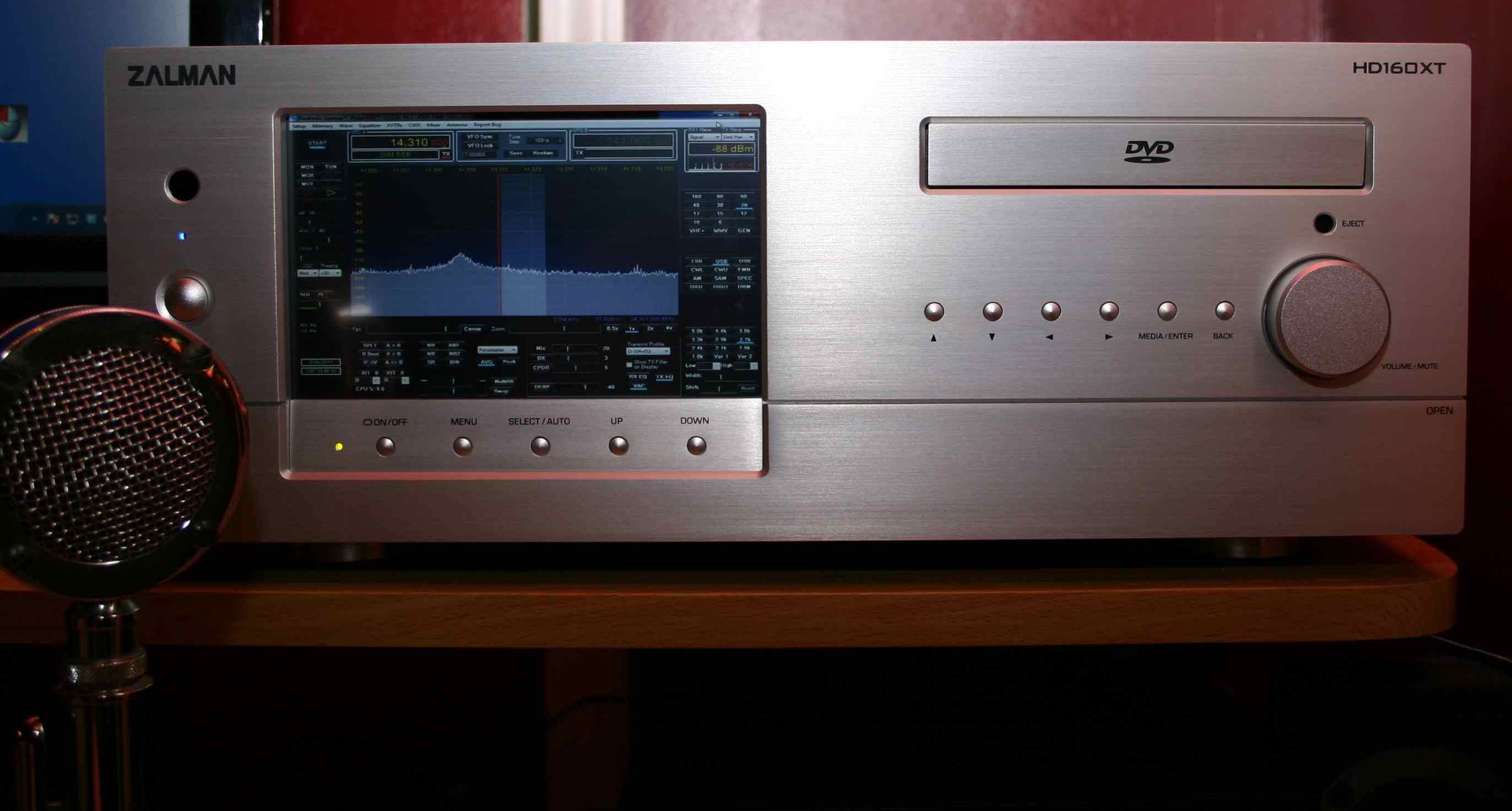 I am officially declaring a new category of PC and I shall call it the “SDRPC”. Now some of you may think that ole KS4JU has way too much
time on his hands, but I think the SDRPC wind up adding additional aesthetics and function to your Ham Shack. It also adds a little extra “flair” for Software Defined Radio users. It really does give you that “feel” of an old school rig and looks darn good doing it.

The PC Case
I was in the process of doing some upgrades to my old PC and decided to give it a facelift in the process. I had built several HTPCs in the past and thought the principles behind the HTPC would transfer pretty nicely to a dedicated Ham Radio PC. If you are not familiar with the HTPC (Home Theater PC), this was category of hi-end PCs that were designed to be integrated into a Home Theater environment. The HTPC was typically a high-end PC used as a DVR, Audio Server, or Video Processor. As an offshoot of this, a series of PC cases were designed to look like high-end audio components. The nicer HTPC cases were typically built out of high quality aluminum, had knobs, and some type of front status display. Usually when we build a PC, we probably give the least attention to the case. Normally, we just go for the $69 dollar special. After have building dozens of PCs for my self and others, I can tell you this is a big mistake. Most cheap cases do a very poor job of dissipating heat. Heat can take its toll on your high performance PC and eventually lead to thermal shutdowns or component failure. The main duty of good PC case should be to do a good job of dissipating heat. One of the beast ways to do this is to use aluminum as the case material. Aluminum will turn the case into one big heat sink to help keep the PCs components cool. The other way to get rid of heat build up is to provide good circulation.  This can be achieved with fans that move air through the PC as well as directly cool major heat producing components such as the hard drive. One side effect of all these fans is the noise unless you provide thermal or manual fan control to slow the fans down when not needed.

Enter the Zalman HD-160XT
While browsing one of my favorite stores (Newegg) for a new case, I came across the Zalman HD-160XT for 50% off. Before you get too excited even at 50% off the cost of this case is far from a $69 special case. It only comes in silver from Newegg, but I was okay with that since it matched my D104 microphone J.  To be fair this is an older case that has been discontinued by Zalman. However, it is still an extremely nice case and offers a big bang for the buck at the current price. Here’s what you get:

I felt that the build on this case was slightly more challenging than a conventional case. It will take either a micro-Atx motherboard or a regular Atx board. There is a lot more to hook up in this case than normal. One interesting thing is that this case only has front panel connectors for the power switch and power light. There is no reset switch or hard drive activity light. There are several connections that go to the internal USB headers of the motherboard that go to the front panel USB ports and touch panel. You also will need to mount the two temperature sensors wherever you want to measure temps. Typically one near the CPU and one for case temps. The drive bays are removable, so this makes mounting the hard drives and optical drives a snap. One hint I can give you is to mount your drives first. With a full size ATX motherboard mounted and the shear number of wires involved, the drive bays can be a bit of a pain to remove. Make sure you have connected all the power connectors for the fan controller and monitor. To use the built in display as a second monitor you will need a video card capable of driving dual displays. If you don’t have one, dual display video cards are cheap. The 7″ monitor has a VGA connector on it, so be sure to have a DVI to VGA adapter handy if you have a dual DVI card. The hardest part of the build is taking off the plastic front part of your DVD drive and replacing it with the stick-on one that Zalman provides and getting it all lined up. Another odd thing, I didn’t get a little button thingy to push the DVD drives eject button. I don’t know if its not provided or mine just got lost. No matter, I usually use the electronic eject command anyway.

First of all, I am using Windows 7. So if you are using XP or Vista you are own your own. When you first start the machine Windows 7 will find the touch panel. Don’t use the Windows 7 touch panel driver you will never get the touch screen to calibrate properly.  Install the USB driver and the Touchkit from the included CD. Then do a 9 point calibration with the Touchkit software and the touch panel should calibrate very nicely. You should also install the Zini software. This software allows you to program the internal fan controller. I wound up just setting the fans to manual and run them at about 20%. This allows the fans to remain very quite while keeping things nice and cool. However, your mileage may vary depending on your particular system. The Zini software also provides some other utilities for monitoring the CPU / memory and Network activity through utilizing the front panel screen. The other important thing that Zini does is allowing you to map the remote and front Volume knob to various keyboard commands for the software you would like to control. For example, in my PowerSDR setup the Volume knob is used for tuning the radio. The volume knob also has a press down click, which I mapped to cycle through the tuning steps. One side effect of this is that the volume up and down control on the remote is now tied to tuning PowerSDR and the press down click is tied to the remotes mute button. No big deal as long as you know that when you are in PowerSDR and press volume up or down you are actually tuning the radio. Of course there are oodles of keys on the remote you can map to PowerSDR. Due to the internal wiring in the Zalman case you can also control the PCs power and standby from the remote. So if you are just feeling lazy, you can control your SDR radio from across the room. By the way you can get the keymap file for PowerSDR from http://support.flexradio.com/Downloads.aspx?fr=1 It’s a little old and there may be a newer one available somewhere but a lot of the key commands are listed here.

How well does it work?
It a word “great”! The Zalman HD-160XT makes it look like you have a high-end rig on your shack desk. Again its mainly cosmetic, but it looks cool. Can you control PowerSDR through the touch panel? I would say basically in a pinch, there are way too many tiny buttons on the

PowerSDR screen. Plus you have to run the 7″ display at 1280 x 720 for PowerSDR to fit on the screen. This makes PowerSDR appear even tinier. What we need is a good 800 x 600 reduced function finger friendly PowerSDR skin for touch panel applications. There may be some third party solutions that can be used for simplified control that I will take a look at in the future. As it is, you can certainly operate PowerSDR with just the touch screen and a stylus. The built in display can also be used for a variety of applications from monitoring a DX cluster, monitoring the system status, to displaying satellite-tracking software. Now this is certainly something you can do with any dual display system. This just looks a little cooler. There are several other cases available from Newegg like the Zalman HD-160XT, but they are a bit more expensive. However they do come in blackJ I suspect that when the Zalman cases run out this will be your only option. There is a blatant link to the Zalman HD-160XT from Newegg at the bottom of the page if you’re interested (Oops sold out since this article was published). I also hope to have a video up in the next couple of days of the SDRPC in action. So stay tuned!