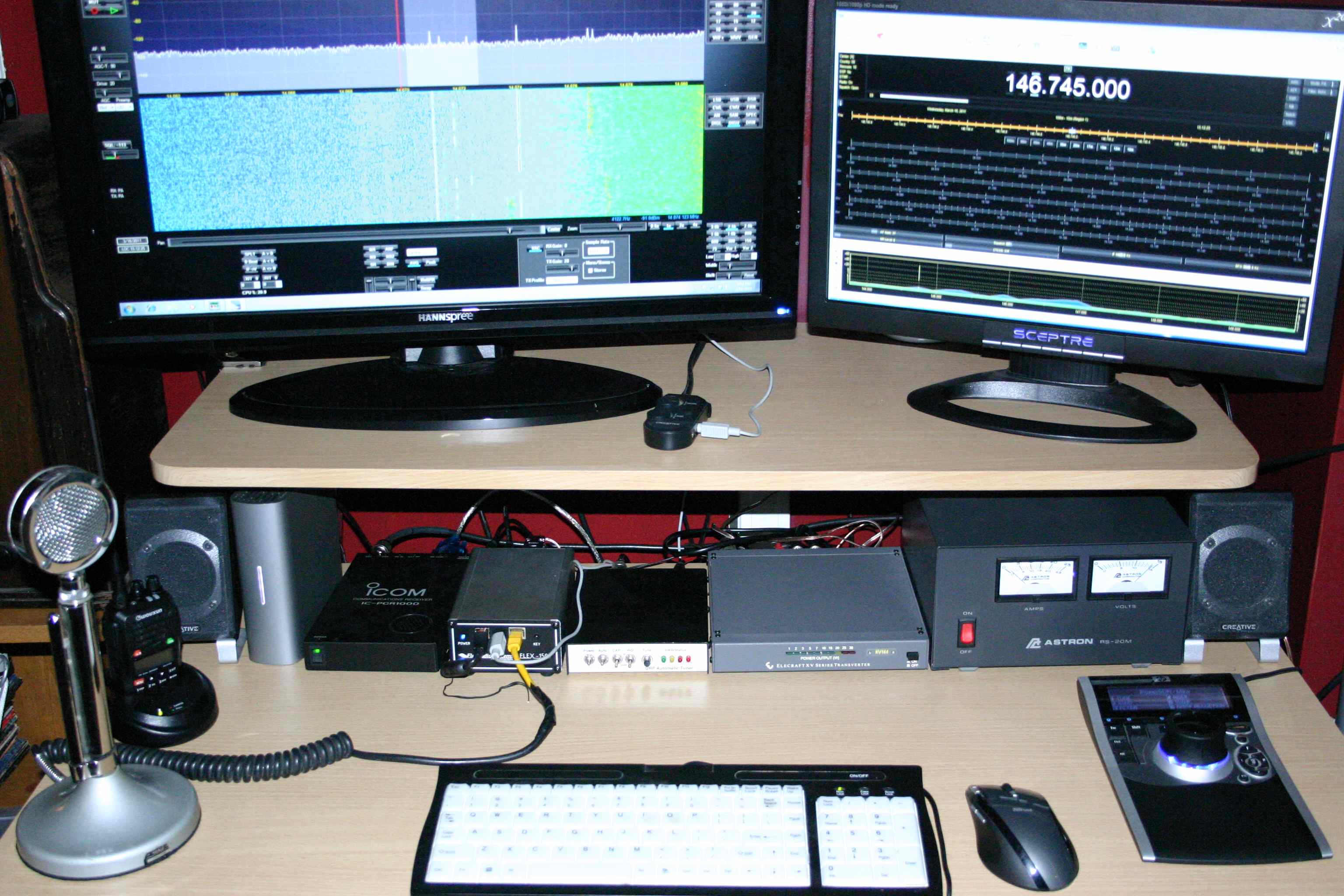 This is my “Blackbox” Amateur Radio Station. I know, I know, this is apparently terrible and frightening sight to some Amateur Radio operators. If this image disturbs you avert your eyes. I know there aren’t very many knobs to play with and not many pretty flashing lights or buttons to push. Its not a pretty picture. However, I feel that the “Blackbox” station offers far more flexibility, features, challenge, and fun than conventional Amateur Radio stations. That’s just my opinion, and it is not one shared by some Amateur Radio operators and that’s ok with me. I will address this a little later in the article, but for now here is the equipment that I am using listed from left to right.

1. If you are an old-timer, you will recognize the Astatic D-104 microphone. I kind of like the retro feel of this unit amongst the modern gear as a reminder of Amateur Radios’ roots.
2. Computer speakers for the computer and Flex 1500. Boring but necessary.
3. A Wouxun KG-UV3D VHF/UHF HT for keeping up with the local repeaters. I know this doesn’t count as a “Blackbox”, but if there were a SDR HT, I would definitely have it. By the way, the KG-UV3D is a fantastic inexpensive little HT. I will address this in a future post.
4. Ok the next item is an external hard drive, so that really doesn’t count.
5. Next to it is an old Icom PCR1000 general coverage receiver. The receiver is not a SDR radio, but a computer provides the receivers’ display, tuning, and other controls. This radio receives from 10kHz to 1300mHz using WFM, FM, AM, CW, LSB, and USB. It even has a sub-receiver to drive a bandscope feature. I use this a second HF receiver, as a downlink receiver for satellite communications, public safety scanner, trunk tracking radio, and other general monitoring duties. Since this is a pretty old radio, Windows 7 compatible software is a bit hard to come by. Fortunately, Ham Radio Deluxe supports it wonderfully. I would love to upgrade this to a more modern piece of hardware, but there are not many affordable wide coverage SDR receivers yet. The closest thing is the Winradio line of receivers. I will have think about that.
6. The Flex 1500. Fabulous little QRP radio. Yes, I am a QRP kinda guy partly because I live in an antenna-restricted neighborhood, but mainly because I enjoy the challenge. The Flex 1500 just made working QRP a whole lot better!
7. An older LDG QRP auto tuner. Old but still works great.
8. Elecraft XV-144 transverter connected to the Flex 1500 transverter ports. This used for 2M satellite uplink and weak signal SSB work.
9. Astron power supply.
10. And finally, the 3D Connexion Space Pilot. Hey I know this is technically a knob, but it isn’t really necessary. Its just another computer interface like a mouse.

The “Blackbox” station lets me do just about anything I want to do with Amateur Radio. Work satellites, most digital modes, and voice without having to use additional hardware and wiring. I can change the configuration on the fly by loading different software applications, run two independent radios simultaneously, automate logging, automate satellite communications, and multitask on the digital modes. I can use less power and still have a very effective communications setup. The “Blackbox” station arrangement lends itself to a lot of flexibility and experimentation.

Ok, that all being said let me get on my soapbox for a minute. Certainly everything discussed above can be done with conventional radio equipment and that’s fine. However, perusing the Amateur Radio forums, I see a lot of anti SDR radio posts. Most of them are totally uninformed and ridiculous. I haven’t seen such controversy since the proposal to remove CW from the Amateur Radio licensing requirements. Apparently some Amateur Radio operators love their knobs to the point of, well lets just be nice and say “obsessively”. It reminds me of when the local club many years ago was experimenting with APRS for Skywarn usage. One of our very respected club members asked during a presentation asked “Why would I operate my 3000 dollar computer in the middle of a thunderstorm while I could just simply use my 2 meter HT to tell everyone what’s going on. At the time all I could say was “You have an excellent point!” I knew that trying to explain to him the value of disseminating weather data via a computer network would never change his mind. In the end we got the APRS Skywarn system going anyway. Some of these forum posts do make excellent points concerning the drawbacks of SDR radio and you may never change their minds. That’s ok. Technology will still move forward without their approval.

To me the spirit of Amateur Radio was always based in experimentation and exploration of communication technologies. Sadly we have lost some of that pioneering spirit over the years and some of these forum posts reflect that. The challenges that SDR faces are many and requires operators who are willing to experiment with the technology embracing both the good and bad. You have to remember that some Amateur Radio operators are purely “appliance operators”. They go to local Amateur Radio shop and buy a rig off the shelf, bring it home and turn it on and start talking. They have never used a soldering iron, built an antenna, or a kit. Nobody says you have to, but they do miss out on some of the fun of Amateur Radio and a deeper understanding of the hobby. The other challenge SDR faces is its highly dependent on computer technology where conventional Amateur radios are not. The one thing I learned after being a technology instructor for over 25 years is that computers aren’t for everybody. If you owned a new car that broke down as frequently as a modern computer you would be invoking the “Lemon Law”. Personal computers still haven’t reached the “Appliance” state that was promised years ago. Some Amateur Radio operators consider themselves “Computer Savvy” if they can turn the thing on a type in www something. The sad thing is that you will never convince them otherwise. They may be able to even dazzle you with jargon, but they still really don’t understand a bit of it. Just ask them if they have ever built a computer from scratch or wrote any computer code. The honest answer is probably no. Come on people you are Amateur Radio operators, you can do better than that! With SDR you are going to have to educate yourself a bit more.

If you want to simply turn on a radio and start talking away, stay away from SDR right now. If you aren’t comfortable with OS tweaks, virtual sound ports, virtual serial ports, hardware interfacing, etc. Then SDR is not for you unless you are willing to put in the time to learn the hardware and software. Isn’t that what Amateur Radio is about learning and experimentation.

So end the end SDR right now is definitely for everyone, but over time it will get better and better. Like all new technologies it has its growing pains. So if you think SDR is for you come on in, but keep an open mind! Put together your own “Blackbox Station” Oh yeah, sometimes its fun to be bad!

One thought on “Blackbox Station Operators the “Bad Boys” of Amateur Radio?”