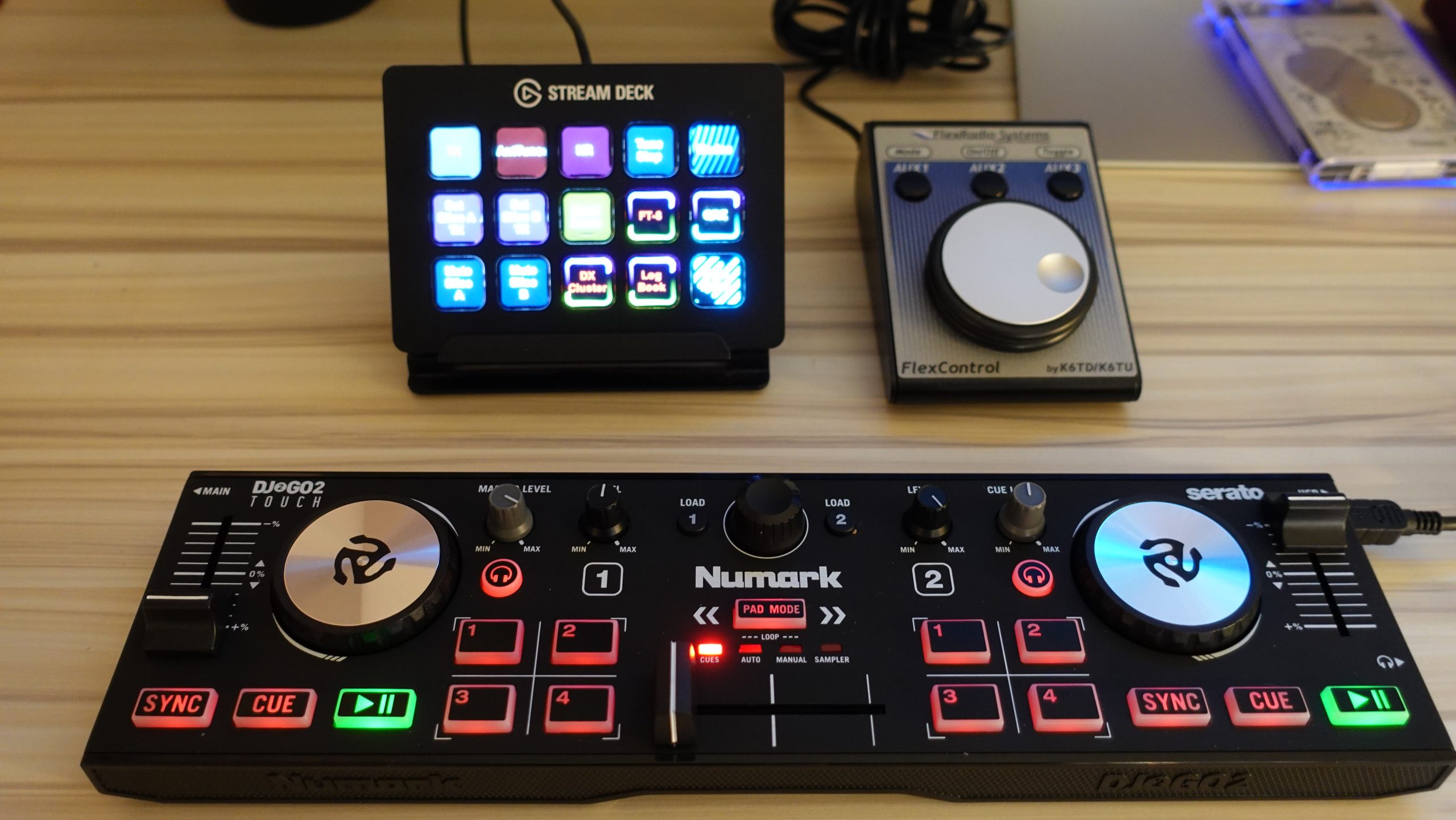 One of the great features of Flex Radios is their desktop control software SmartSDR. The software allows you to control most every aspect of the radio from your laptop, desktop pc, as well as iPhones and iPads. Chances are that even if you have a M model Flex radio that has knobs and buttons, you will probably wind up using the software a great deal for radio control and interfacing to 3rd party ham radio applications. When using the the SmartSDR you will spend some of your operational time using the keyboard and mouse changing settings, tuning the radio, and transmitting. Eventually you will develop a workflow that suits your style of operation. Adding an external controller to your setup can help improve or speed up your work flow. External controllers can give you access to dedicated buttons for radio control, VFO tuning knob, or macro sequences. Using external controllers are far more efficient than a keyboard and mouse interface. When using an external controller for awhile, you will develop muscle memory that will make your workflow far more efficient. This is why creators using computers for music production or video editors will gravitate to hardware controllers to help cutdown on the time needed to complete a task. The hardware controller helps to minimize the time spent from going back and forth with the mouse or keyboard by allowing the user to press a single button. SmartSDR for Windows or macOS does allow for some level of external hardware control. However, the recently released macOS version of SmartSDR has more extensive support for hardware controllers than the Windows version.The three controllers discussed in the video are the best controllers currently available for SmartSDR.

Elgato Stream Deck
In a nutshell, the Elgato Stream Deck is a controller that comes with a 15 programmable backlit buttons. The buttons can be customized with text and graphics background. The included software allows the user to program and customize the buttons. The nice thing about the Stream Deck is that you can customize the buttons as different pages. For example you can program one button to bring up another page of 15 buttons to control certain specific features of the software. The Stream Deck is a pretty powerful device because it can support things like on and off states and macros. The programming can get pretty deep. The Stream Deck can directly support some software by communicating with the software’s API. However, it will support most software through the programs shortcut keys. The good news for SmartSDR for Windows is that a free program FRStack provides support for the Stream Deck device by adding a fairly extensive set of buttons for directly controlling SmartSDR for Windows. The Stream Deck can also be used along with the macOS version of SmartSDR. However, SmartSDR for macOS does not directly support the Stream Deck. Fortunately, there is a good workaround. The macOS version SmartSDR supports Midi devices. The Stream Deck software comes with a Midi plugin that can be activated by the user. This allows the Stream Deck can send Midi commands to directly control various aspects of SmartSDR. This does require a little more work by the user to assign buttons to the Midi actions in SmartSDR. This described in more detail in the video. The 15 button version (which is the most popular version) typically sells for $150 or less on Amazon.

The DJ2GO2 is a DJ controller that is directly supported by the macOS version of SmartSDR as a Midi device. The DJ2GO2 features dual touch jog wheels which lets you have 2 VFO wheels plus three sliders, 4 knobs (actually there are 5 knobs, but one knob acts like a button), around 18 buttons which four of these buttons can be assigned to up to 16 functions using the shift button. Anyway, there is a bunch of controls that can be assigned to this device to control SmartSDR. The controller is small and gets out of the way taking little room on your desktop. It does take a some time setup because you use the Midi mapping feature of SmartSDR to customize the controller to your liking. Again, check out the video for more in-depth information on setting up this controller. The Numark DJ2GO2 Touch is also a terrific value at less than $80 on Amazon.