Inroduction
SDRplay’s RSP1 has long been a great value in an entry level SDR platform for radio hobbyist looking to get involved in Software Defined Radio. The RSP1 has also been a favorite for adding spectrum displays to non-SDR radios or experimenting with SDR applications. The other advantage of the SDRPlay series is strong software support. SDRplay offers their own SDR program SDRUno which is a highly powerful and well polished SDR client that leverages all the features and capabilities of the SDRplay series. The SDRplay SDRs are also compatible with several popular 3rd party SSDR programs such as HDSDR, SDR-Console, and CubicSDR. Several PC platforms are also supported including Windows, Linux, Mac, Android and Raspberry Pi 3. SDRplay offers excellent support via their website and Facebook Page. In short, the SDRplay series offer a great value for an entry level SDR. The nice thing about SDRplay is the Jon Hudson and SDRplay Team are always looking for ways to improve the SDRplay platform, either through improvements in software or hardware. The SDRUno software is updated on a regular basis with new features and improvements. The RSP2 was added last year and offered hardware improvements and new features. Frankly, this has been pretty rare compared to other entry level SDR platforms who often don’t improve their products, offer non-existent support, and eventually abandons the product. SDRplay has continued to improve the SDRPlay SDR platform by introducing a new entry level product the RSP1A with improved receiver specifications.

The RSP1A
In short the RSP1A is pretty much similar to the RSP1 on the outside. A black plastic box with a SMA antenna port on one side and a USB connection on the other side. As a matter of fact, you can’t tell the difference physically between the two without checking for the model number on the bottom of the units. All the changes are on the inside. Here is a list of the improvements :

As you can see these new additions to the RSP1A should significantly increase overall receiver performance in regards to strong signal handling. The Bias-T will also be a welcome addition for those who are interested in satellite reception or other signals above 1GHz since you can now easily add a Bias-T powered preamp to the RSP1A. Also the increased frequency range to down to 1kHz may be useful for those who want to explore the lower end of the RF spectrum. The selectable broadcast filters will help out in dealing with interference from strong broadcast stations. It was also nice that SDRPlay included the internal RF shielding like was done with RSP2 to help keep out unwanted computer RFI. With the improvements in sampling rates and the new tweaks to the front end it will interesting to compare the RSP1A to far more expensive SDR receivers since the RSP1A is approaching similar receiver specifications for SDR receivers costing 10 to 30 times more expensive. The RSP1A will also be supported by SDRUno with a software update. Here is a quick chart that summarizes the differences between the RSP1 and RSP1A.

In Use
RSP1A vs RSP1
Having spent a great deal of time with the RSP1 and RSP2, setting up the RSP1A was just as easy. Install SDRUno and plug in the RSP1A to a USB port and you are basically good to go. If your new to SDRUno, there will be a bit of a learning curve initially. There is a ton of features in SDRUno to help you get the 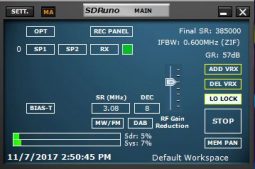 best from your SDRPlay, so it would be worth your time to download the manual. For you that have used SDRUno in the past, you will find some new entries in the RSP1A control panel. Their are additional buttons to activate the Bias-T feature as well as buttons to activate the MW/FM and DAB filters. Everything is should be familiar if you have used the RSP1 in the past. Since the RSP1A is pretty much the same as RSP1, there are virtually no differences in the basic operation of the RSP1A.  Most of the changes are internal to provide increased receiver performance. After some listening tests between the RSP1A and the RSP1 connected to the same antenna via a splitter using the “out of the box” settings in SDRUno, there were a couple of differences that immediately noticeable. The RSP1A was noticeably more sensitive than the RSP1. Especially in the AM and FM broadcast bands and in the UHF / VHF bands. Weak signals were noticeably better on the RSP1A versus the RSP1. In the HF bands the RSP1A again was more sensitive than the RSP1, especially when lowering the RF Gain Reduction. The RSP1A could hear weak signals better than the RSP1 could not no matter how the RSP1 was adjusted. While listening to the HF bands another big difference between the RSP1 and RSP1A became apparent. Strong interference from static or a strong signal did not cause the the spectrum display to jump like the RSP1. This was nice to see. Since interference from strong broadcast stations is not a problem in this area, there was not a way to check them out during the listening tests. However, users who do have this problem will probably appreciate this new feature. In short, going from the RSP1 to the RSP1A would be a worthy upgrade considering the price.