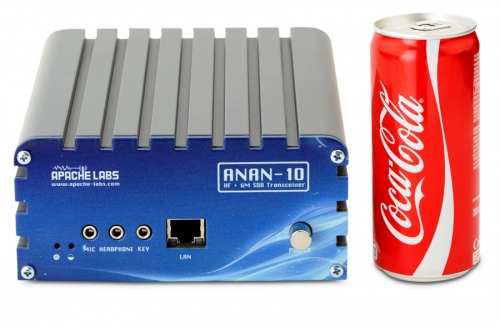 Doesn’t sound too bad for a DDC/DUC SDR transceiver for under $1000 with 15 – 20W out on HF and 8 to 10W out on 6 meters. This means that the Anan 10E’s only real competitor is the Elecraft KX3 SDR hybrid in this price range. However to be fair ,when talking about SDR transceivers, this would be basically an “apple to oranges” comparison. KX3 uses an older method of SDR by using an IQ output and sound card interface unlike a DDC/DUC SDR transceiver. The use of IQ port severely limits the bandwidth that can be used with SDR software, usually topping out at 192kHz when used with a sound card capable of that bandwidth. The Anan 10E uses an ethernet interface to provide a much faster interface with data fed directly in the computer and SDR software that allows for monitoring 48/96/192/384kHz of spectrum on two separate receivers. This is where you see a difference in the Anan 10E’s specs from the Anan 10 which can display up to 1152kHz on seven separate receivers. If the power output is not enough for you, the Anan 10E could be interfaced to a separate 100 watt amplifier and you would still be well under the pricing for a 100W SDR.

Software is supported by two SDR programs for Windows. PowerSDR_mRX which is a modified version of PowerSDR that supports some of the unique features of the Anan SDRs like automatic antenna switching via Anan’s multiple antenna ports. PowerSDR also supports transmitting with the Anan SDRs. cuSDR is another program that leverages some of the Anan’s unique receiver functions, but is still under development. If you have a Mac then there is Heterodyne which is extremely basic. Mac users would probably be better off using Bootcamp and Windows or possibly Parallels with a Windows virtual machine. The software can be downloaded from openHPSDR.

Since the Anan 10E is just starting to trickle out, there is not a lot of them out in the wild yet. If your interest has been peaked by the Anan 10E, you may want to consider joining the Apache Labs group on Yahoo. Since most of the Anans are fairly similar you should find this group a useful resource.

If you are interested in purchasing an Anan 10E, you may have to stand in line a little while. The US dealers have been clearing pre-orders on the Anan 10E. However, it appears that they have caught up with the first wave and now have a few left in stock. As of this writing Gigaparts did have a few available units left in stock. However, Ham Radio Science did claim one of those. So look forward to an unboxing video and a first look article and video over the next few days 🙂