This is a follow up to RTL2832U ADS-B Performance Testing

We have already determined that an RTL2832U DVB-T stick running gr-air-modes makes a fairly good ADS-B data receiver for ~$25. Even with the little stock antenna that comes with it sitting indoors can give you a 60 – 70 nm range. So how would it do with a commercial 1090MHz antenna connected? I was able to borrow a commercial 1090MHz antenna to see how much difference it would make in regards to receiving ADS-B signals using the RTL2832U stick. I was expecting a little better performance, but not much. Boy was I wrong, the commercial 1090MHz antenna made a huge difference in ADS-B reception with the RTL2832U stick. The ADS-B message rate increased dramatically as well as the range. Also, the directional sensitivity improved allowing reception of ADS-B signals from wider area. To be fair to the stock antenna, I did not mount the commercial antenna out side, but left in on my workbench in the same location that I originally tested the stock antenna.

Looking at the Polar Plots below, we can see that coverage with the commercial antenna (left) is wider with more distance. Also the stock antenna test (right) was ran over a 5 hour period versus 1 hour for the commercial ADS-B antenna.

Also the other large difference noted was a dramatic increase in the number of ADS-B message frames received. Take a look a the message rate charts below and compare the original stock (right) antenna test that ran for 5 hours versus 1 hour for the commercial antenna (left).
Click to make larger.

The results were generally more useable position messages as shown below. 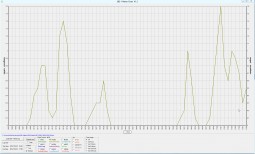 For a more visual perspective, here is a video showing the dramatic difference in reception between the stock antenna and the commercial ADS-B antenna. The comparison was done using SDR Sharp receiving the ADS-B signals directly. You will see that using the stock antenna the ADS-B signals are not usually visible or barely visible above the noise level. The good news as far as the stock antenna goes is that gr-air-modes will decode these weak signals that are not necessarily visible. When we switch to the commercial antenna you will notice a large increase in signals over the noise level.

I also had the opportunity to borrow and compare an ~$500 commercial ADS-B receiver against the RTL2832 home-brew ADS-B system both using the commercial antenna indoors. The results were kind of surprising in that the RTL-2832U could hold its own for the most part against the commercial ADS-B box. The commercial receiver was not dramatically better than the RTL-2832U / gr-air-modes combo. Yes, the commercial unit was more sensitive than the RTL-2832U in that it could hold a signal about 30 -50 miles further depending on direction. In some directions it dropped aircraft at the same point the RTL2832U would. However, where the commercial receiver shined was in frame rates. Using PlanePlotter with 3 to 4 planes in view, the commercial unit would deliver  about 35 frames per second where the RTL2832U / gr-air-modes combo would deliver about 6 frames per second. Now for tracking 3 or 4 planes simultaneously, this is probably not a problem. However, if you are in an areas where you be tracking dozens of planes, you may have issues with dropped frames resulting slower position updates or not being able to track all aircraft in view. Again, for the hobbyist who is interested in getting their feet wet in ADS-B reception or would like to see what aircraft traffic is available in their area before investing in more expensive gear, the RTL2832U / gr-air-modes combo is just the ticket.