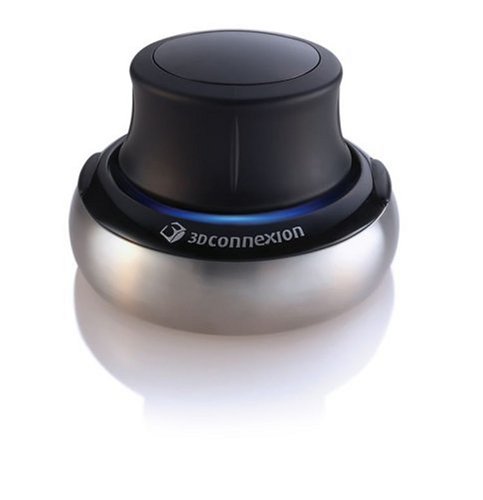 Fortunately, 3D Connexion has recently released a new Beta 10 driver that will allow you to map the controller knob to any keyboard command you want. Those of you not familiar with 3D Connexion devices might find it helpful to know that the knob supports the following motions:
Push Knob Down
Pull Knob Up
Push Knob Left and Right
Push Knob Forward and Back
Twist Knob Left and Right
Plus hot-keys depending on model

The new drivers will now allow you to assign the knob motions to keyboard commands. For example you could map the Push Down command to PowerSDRs keyboard shortcut for the Mox button. This would allow you to transmit by pushing down on the knob. The driver lets you create a custom profile for each program you use so that the 3D Connexion device will send custom keyboard commands to the program that has focus. This would allow you to add controls to other programs like Ham Radio Deluxe, your PSK31 software, or about any other software that supports keyboard shortcuts. I could also see this a great hardware controller interface for antenna rotator control software. You use of this device could only be limited by your imagination and the limitations of the keyboard shortcuts of your Amateur Radio Software.

Right now the new Beta Driver 10.9 only supports the Space Navigator, Space Pilot Pro, Space Navigator for Notebooks, and the Space Explorer USB. If you own a now discontinued Space Pilot, due to popular demand, it will be supported in the next version of the Beta 10 software. You can download the new driver here.

Using the iPad to Control Your Rig