Using the RTL2832U on the Macintosh 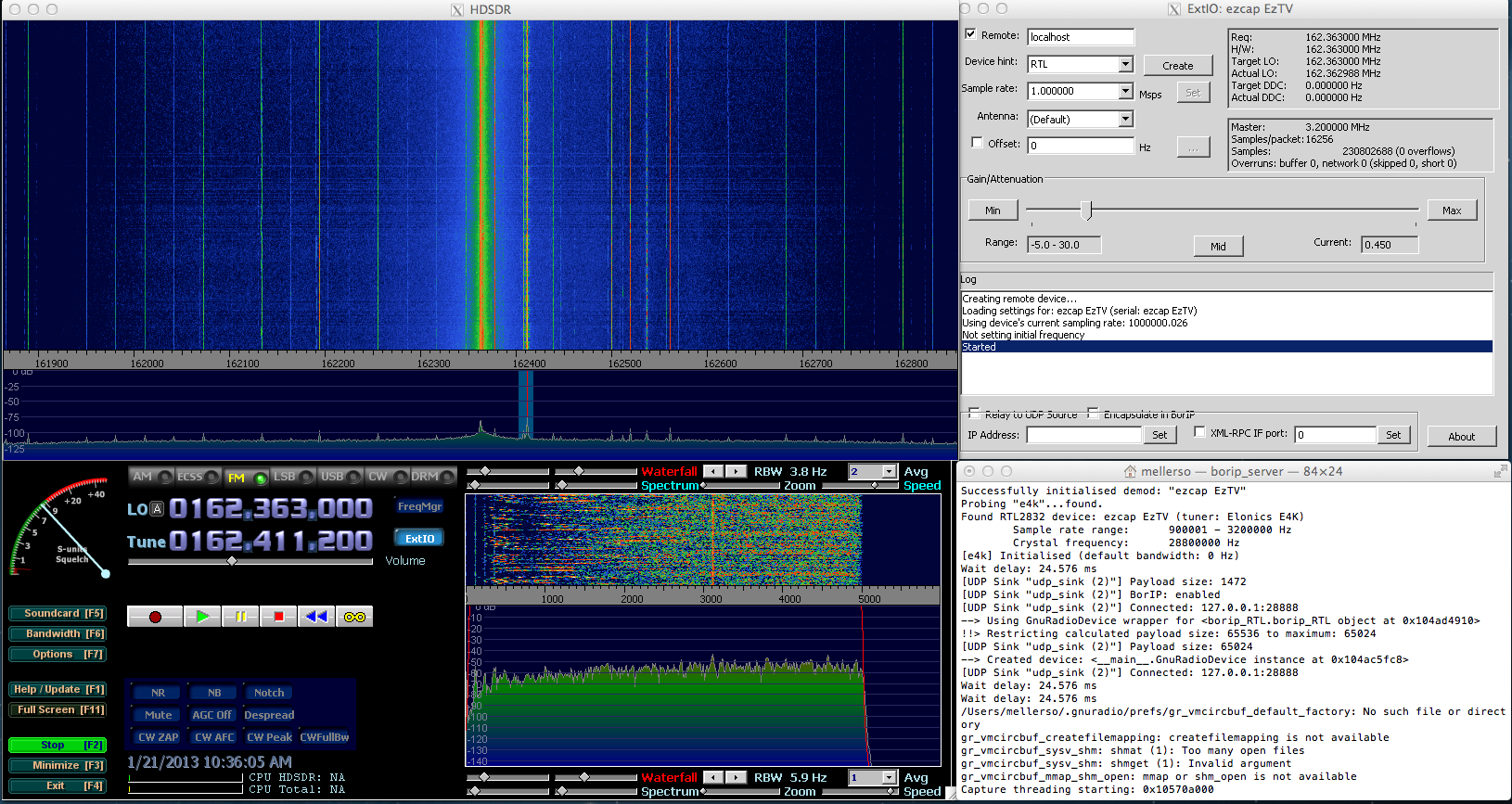 Mac users may have felt a little left out of the RTL2832U SDR revolution since there has not been a really easy way to get the RTl2832U to run with one of the SDR software programs like HDSDR. If you are a pretty hardcore Mac user, you know that OSX is basically a custom version of Linux. So, if you really wanted to dig in to the Linux side of OSX you can get a RTL2832U running under OSX. The simplest way to get a RTL2832U stick running on a Mac is to just install Windows under Bootcamp and away you go. However, thanks to Alain de Carolis, there is now a fast easy way to get the RTL2832U going on your Mac. You don’t even have to install anything on your Mac. You can even run the software from a USB stick. Alan has created a custom version of the BorIP server and HDSR that is wrapped in some “linux magic” that will allow both the RTL2832U and HDSDR to run on your Mac. You simply download the DMG file from Alains’ website and unpack the DMG file. Here are the instructions for getting this going from Alains’ website:

1) Download the DMG package from here: https://dl.dropbox.com/u/17744176/HDSDR%20OSX%20v2.51%20RC1.dmg
2) Double click to open the DMG file
3) The “HDRSDR OSX” virtual drive that the DMG created will contain 3 files: README.TXT, “GNURadio – borip_server” and HDSDR. Read the first and copy the two others anywhere in you system (Applications, Desktop or anywhere else you like)
4) Eject the “HDRSDR OSX” virtual drive. You can now also erase the DMG, if you want
5) Double click on the “GNURadio – borip_server” application (that you have just copied) in order to run it
6) A Terminal Window should appear with some text running in it. The latest two lines will be:
==> Starting TCP server on port: 28888
==> TCP server running on (‘0.0.0.0′, 28888) in thread: Thread-1
7) Double click on the “HDSR” application. HDSR (with the ExtIO window) should now appear
8) Connect HDSR to the dongle as if you were on Windows
9) Click on START to activate the receiver
10) You should now be receiving signals

Observations:
We tested the software on an older iMac that uses a 3.06 Ghz dual core Intel processor , 4 GB ram, using OSX 10.8.2 with an RTL2832U with a E4000 chipset and an RTL2832U with a R820T chipset. Starting with the RTL2832U / E4000, the BorIP server starts very quickly in the terminal window. However, the HDSDR program took several minutes to start and find the RTL2832U stick. Once everything was loaded. HDSDR worked fine with the RTL2832U / E4000 chip. After a few minutes we did notice a little stuttering in the audio, but several background processes were running which may have caused this. We didn’t check that every single little feature worked on HDSDR using Alains’ software. We were just pretty satisfied that at least you could receive ok with the HDSDR and the RTL2832U stick.

With the RTL2832U / R820T, the software did not work right away. The reason for this appeared to be because the BorIP server is set by default to an E4000 chip. You have to wait awhile for the everything to time out. When the ExtIO panel comes up try changing the Device Hint to RTL from the drop-down menu. You may have to restart everything after making this change to get it to work. If nothings happens for awhile. you may also have to cancel the box that pops up that says it’s setting up the device and go to the ExtIO screen and have it manually create the RTL device hint. It works with the R820T, but it is a lot tricker to get working than the E4000. There also may be a long pause once you hit the start button in HDSDR, but you should eventually hear some audio. The other issue we ran into is that the Magic Mouse can be way oversensitive to try using HDSDRs’ scroll wheel tuning feature. It appears the program could use a little more tweaking to work better with the R820T. If you are using an E4000 chip you will probably have less problems at this stage. If you are interested in seeing this developed further, you may want to comment on Alains’ website.

Thanks to Alain for giving Mac users the ability to easily experiment with RTL2832U sticks.

RTL2832U and HDSDR Running on OSX 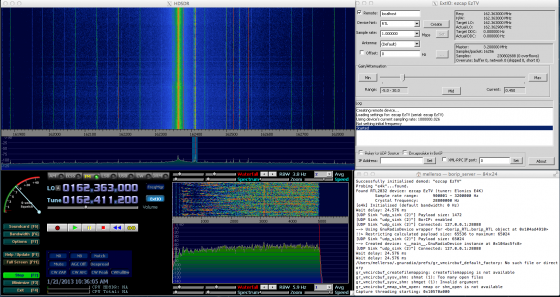