There has been a pretty good buzz about the “$20 SDR Radio” since the good folks over at Osmocom figured out how to convert a $20 DVB-T  usb dongle into an SDR radio using software only. I decided it would be worth spending the $20 bucks to see how well the DVB-T dongle worked as a Software Defined Radio. Did it work? Yes, but your mileage will definitely vary on this project. Using a RTL2832U DVB-T stick is still in a very highly experimental state. Here is what I found out about the “$20 SDR Radio”

First of all, not just any ole digital TV tuner stick will work. Supposedly the best ones are based on the RTL2832U / Elonics E4000 chipset. These digital tuner sticks are not designed to work on the US digital TV broadcast standard. So, that means you probably won’t be able to buy one in the USA. The easiest way to find one is just go to Ebay and search for SDR Radio. You will get a list of vendors selling these sticks listed for SDR use at about $20. Be sure to check that the stick is using the RTL2832U / Elonics E4000 chipset. Most of these vendors are in China, so expect it to take about two weeks to get to your QTH. I got one of the white ones from runtek88. This unit comes with the usb stick and an antenna. No box, software, and no instructions. I guess you don’t really need them, since the DVB-T stick is pretty much useless for anything else except for the application of it as an SDR radio. Some come with a remote which is also pretty much useless. The sticks are also very small.

First of all, you can pretty much throw the antenna away that the stick ships with. You will find that it won’t pick up muchmore than some very strong local FM broadcast stations. I am sure that some folks have been mislead to think that their DVB-T stick wasn’t working because of this poor antenna. The DVB-T stick is not super sensitive to begin with and a poor antenna will make it even worse. You will need to use a good VHF/UHF antenna with some gain in the bands you want to listen to. It would also be a good idea to use some low loss coax and keep it as short as possible. Mounting the antenna outside if possible would even be better. One thing to note, is the DVB-T stick doesn’t have a lot of RF filtering in the front end. So strong nearby radio signals could cause the tuner to desense  or become overloaded with images. The first thing you will probably notice about the stick, is that it has a Pal TV connector on the end. It looks like a standard RCA connector, but a male RCA connector will not fit. Fortunately, Radio Shack stocks a Pal TV to F adapter. You can get several F to whatever adapters to connect an existing antenna to.

Next you will have to install the drivers, ExitIO controller file, and the SDR software package you intend on using. There are various software projects popping up to support the RTL2832U dongles, but I would highly recommend starting of with an HDSDR installation first, just to be sure everything is working before moving on to other software projects. Use these instructions to get your stick and software installed. During the driver install, you will be asked what device to install the driver to. 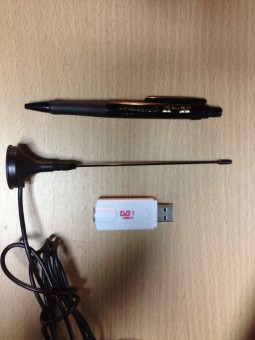 Once you have HDSDR operating, you might want to give SDR# a try. SDR# has been modified to work very well with RTL2832U usb dongles. It has it’s own custom ExtIO file for the RTL2832U with Automatic Gain Control so you don’t have to setup the gain unless you want to. It will also do WFM very well were HDSDR does not. For now, to get RTL2832U support you will need to download the Dev version here.

Ok this is all kind of theoretical and changes depending on the DVB-T chip set and software / setup. Typically the RTL2832U / Elonics 4000 chipset frequency range is 64 – 1700 MHz with a gap at 1100 – 1250 MHz. When using the standard HDSDR the SDR bandwidth shown on the spectrum display is about 1MHz while the SDR Sharp display defaults around 2MHz. Supposedly the bandwidth can got to around 3MHz with tweaking. I have not tried to go above the SDR Sharp 2MHz setting, but some users have gotten the bandwidth up around the 3MHz range.

settings you use. Remember, that the DVB-T stick can be desensitized by strong nearby signals. Performance will depend again on the software / settings combo, as well as how powerful your computer is. Even though the software will run on very modest specs, you would like something with a dual core processor built in the last 5 years or so. My testing of the  RTL2832U / Elonics 4000 based DVB-T was a mixed bag. First of all let me say that for $20 SDR radio, the DVB-T stick is a pretty good deal and performed better than I thought. I found sensitivity a bit lacking with a unmodified DVB-T stick (no outboard preamp).  Using the stock antenna, I managed to pick up a few local FM broadcast stations and barely a nearby NWS station. After getting an Pal to F converter, I connected my attic discone antenna. On the discone I was able to pick up distant FM stations (about 60 miles) and a few ham repeaters. Overall though my DJ-X11 on a rubber ducky did better. However, even though the DJ-X11 is SDR capable, it can’t show 2MHz of spectrum. The DJ-X11 also costs 17 times more. To be fair the discone I used for testing doesn’t have much gain, is not outside, and suffers from loss due to a long cable. So at the end of the day, I am sure that the DVB-T stick would do better with a high gain outside directional antenna. 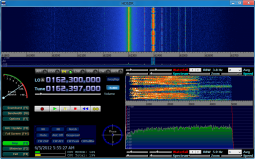 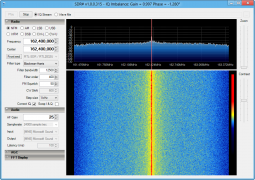 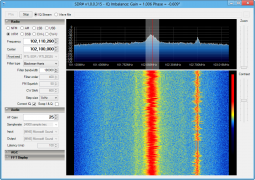 I would have to say that theRTL2832U / Elonics 4000 DVB-T stick is well worth the modest investment if want to play around with VHF/UHF SDR. There are various videos on Youtube showing the stick being used from decoding ACPO-25 to satellite reception. The cheap DVB-T stick SDR has opened the door for more people to get involved with SDR experimentation. There is no telling what cool applications may show up!

Discuss this topic in our RTL2843U Forum!