Editors Note – Apparently SDR Touch is temporarily off the Google Play Store. Martin hopes to have it back soon. You can still get SDR Touch directly from Martin, until the issue has been resolved. (See Martins comment below). In the meantime, you can download SDR Touch from Martin’s Website.

Ok, this was bound to happen sooner later. With the introduction of some very powerful Android tablets last year in the $199 price range like the Nexus7, Kindle Fire, and the Samsung Galaxy Tab, combined with the availability of the inexpensive RTL2832U SDR dongles, it was inevitable that some would do a “mashup” of the two sooner or later. The result is an application called SDR Touch by Martin Marinov. At this time the application is still in the development phase, but is now available  from the Martin’s Website. For that reason, any thing we say here may change in the next 5 minutes.  We contacted Martin and he kindly sent us out the current fully functional version of SDR Touch to take a look at. We were impressed with Martins’ work.

In a nutshell, SDR Touch allows you to plug in a RTL2832U stick via your Android devices’ USB port and SDR Touch allows you to tune and decode the audio from the RTL2832U stick. In essence, you can have a portable touch screen SDR radio for under $250. The other major factor to consider here is that SDR Touch proves that SDR can be implemented on a small battery powered processor. SDR Touch also opens the door for the possibility of the availability of the development of portable touch screen applications for other direct sampling SDR radios. 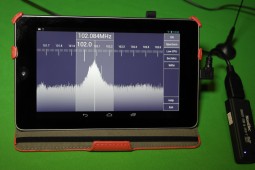 To use SDR Touch, you will need a fairly current Android device running at least Androd 4.0 (Ice Cream Sandwich) or higher. It is possible that SDR Touch may run under older versions of Android, but you will have to “root” your device to use it. Rooting your Android device is not recommended unless you really know what you are doing. You will also need an OTG (On The Go) USB adapter cable for your Android device to connect to the RTL2832U stick. Just any USB adapter won’t work since there is a slight wiring difference in the OTG cable. Of course you will need the SDR Touch application. It appears that Martin is going to make a demo version of SDR Touch available to allow you to test out the software on your device. To open up all the features it appears that you will need to buy a $9.99 key as an in app purchase. Having a demo version of the software is a good idea since there is such a variety in Android devices with different processors, form factors, etc. You should be able to test the software on your Android device to see if it is up to the task. Again, if you have a fairly current Android device with Android 4.0 or higher you should be good to go.

SDR Touch provides the user with the ability to tune the RTL2832U through the use of a tuning bar or via direct entry (with the unlocked) version. The RTL2832U bandwidth around the center frequency is shown via Spectrum display (available full-time in the unlocked version). You can tune the RTL2832U by dragging your finger across the tuning bar or by touching the spectrum display. Demodulation modes include WFM, AM, NFM, LSB, USB, DSB, CWL, and CWU. There is also a Set MHz button to access the direct tuning feature to allow you to manually set the center frequency. There is also a Low CPU button that disables some features which may allow you to use SDR Touch on an older Android device with a weaker processor. Our testing on a Nexus 7 running Android 4.0.2 showed that SDR Touch worked quite well. On the Nexus 7, everything was pretty much plug and play. At this time SDR Touch is fairly basic, but it is still pretty impressive. One feature that it needs fairly quickly is a gain control feature. While we did not experience any overloading issues when using a RTL2832U / R820T stick, you may experience front end overload if you that live close to a strong FM radio station. We also tried out SDR touch with a RTL2832U / R820T stick and the Ham It Up converter. While Touch SDR basically worked, the CW, LSB, USB decoding wasn’t quite there. We could receive CW signals with a little distortion fairly well, but USB and LSB band signals were not easy to get clear and suffered from very low audio. At this time the CW, LSB, USB, and DSB settings are marked with a ! in front of them indicating that they are still a work in progress. With that being said, here are some features that Martin intends to add or improve  in SDR Touch over the upcoming months:

In conclusion, SDR Touch is a great start towards providing a portable SDR solution with an Android device and a RTL2832U stick. This could be pretty useful for signal discovery and traveling. Again SDR Touch is in early development and everything is not perfect, but we feel that at $9.99 that it may be very well worth the price to keep this program in development.

Thanks Martin for a really cool piece of Android software!